Dante’s Train: A Beautiful Train Ride From Faenza To Florence 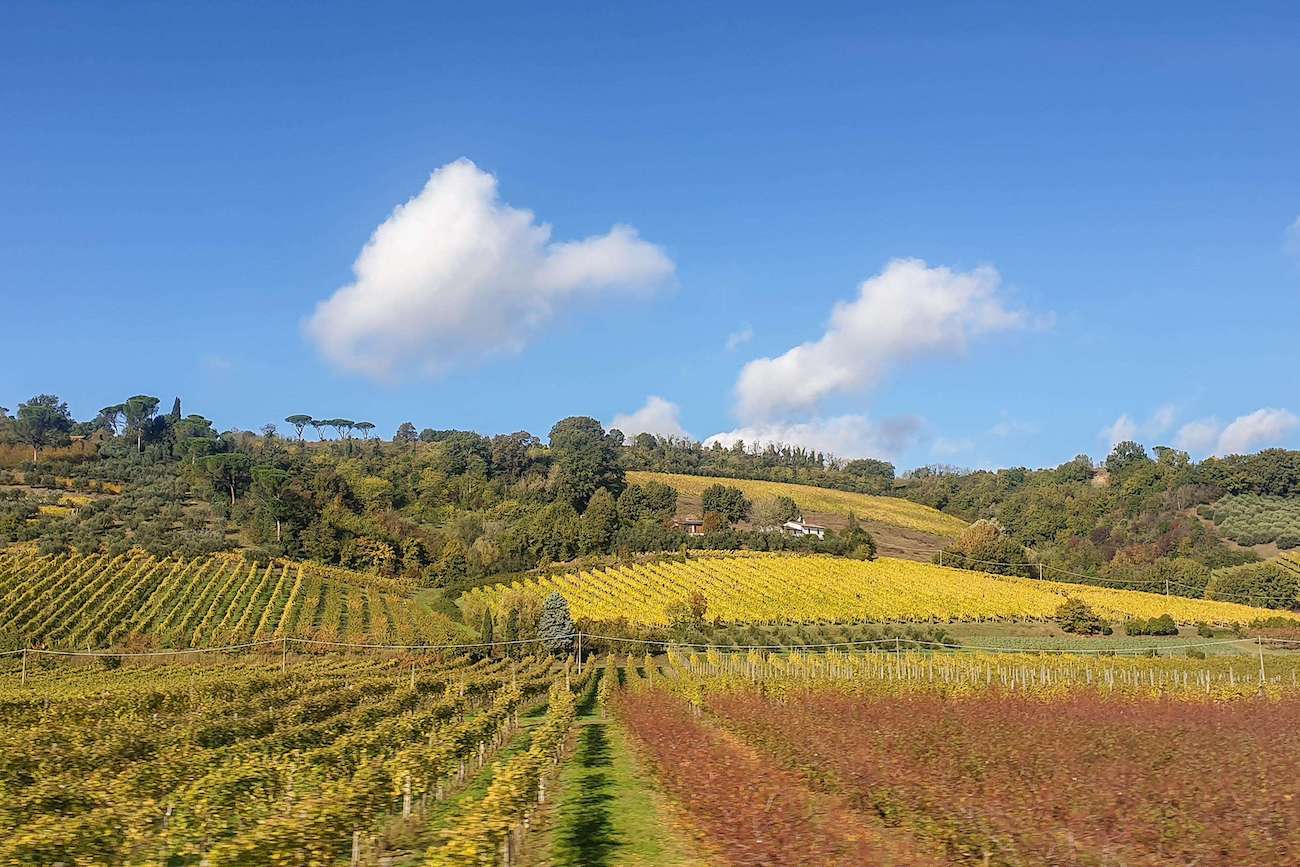 Ever heard of Dante’s Train? The scenic train ride starts in Faenza and ends in Florence (or vice versa),  leading you across gentle hills, cultivated fields, and thick forests, from Emilia Romagna to Tuscany. A short itinerary with a lot to do and see along the way. The perfect choice to immerse yourself in nature and discover a piece of Italy off-the-beaten-track and at a slow pace.

Of all means of transportation, the train is my favorite. There’s nothing like feeling lulled by the gentle swaying of the wagon, reading a book, dozing, or savoring the landscape. Most of all, I’m in love with scenic train journeys. After traveling on the charming Porrettana rail route (connecting Bologna to Pistoia), I recently discovered the railway line from Faenza to Florence.

The line was nicknamed Dante’s Train as a tribute to Dante Alighieri, the Italian poet author of the Divine Comedy, considered one of the masterpieces of world literature of all times.

The train line connecting Faenza to Florence, ideally starting in Ravenna, travels from Emilia Romagna to Tuscany. It is deeply connected to Dante’s long exile and the many places where the Poet spent his life after being banned.

Dante Alighieri was born in Florence in 1265, at a time of intense conflict between the Guelphs (supporting the Pope) and the Ghibellines (endorsing the Holy Roman Emperor). Like most men living in Florence at the time, Dante fought the battle of Campaldino, joining the Guelphs.

Despite the Ghibellines’ victory, the Guelphs ended up diving into two factions. On one side the White Guelphs, distrustful of the Pope. And on the other, the Black Guelphs, loyal to the Pope. Dante was with the White Guelphs’ faction, which, in the beginning, took control of Florence and chased the Blacks. However, it was a short-lived victory. Supported by Pope Boniface VIII, the Black Guelphs took power in Florence. The new government seized Dante’s assets, barred the Poet from the city in 1302, and sentenced him to exile.

Having become an outcast, Dante spent the rest of his life traveling, mostly in the area between northern Tuscany and Emilia Romagna, crossed by Dante’s train. Finally, in 1318, Dante moved to Ravenna, where he died in 1321. His tomb, a beautiful Neoclassical monument, is considered the start of Dante’s Way (Cammino di Dante), the long-distance circular trekking from Ravenna to Florence and back to Ravenna.

The slow ride from Faenza to Florence takes about two hours and makes for an easy day trip from Rimini, Ravenna, and Bologna. However, there are many interesting towns and spots along Dante’s train route, and this area is a perfect choice for a short relaxing break or weekend trip.

Although Faenza marks the start of the scenic Dante’s Train journey to Florence, it’s worth mentioning that Ravenna, where the Poet died and was buried, is the natural extension northwards. Furthermore, Ravenna is one of Italy’s most beautiful cities. The city is famous for its unique Byzantine mosaics, which became a UNESCO World Heritage Site for their outstanding historical and artistic value. Without a doubt, Ravenna is an unmissable city in Italy. 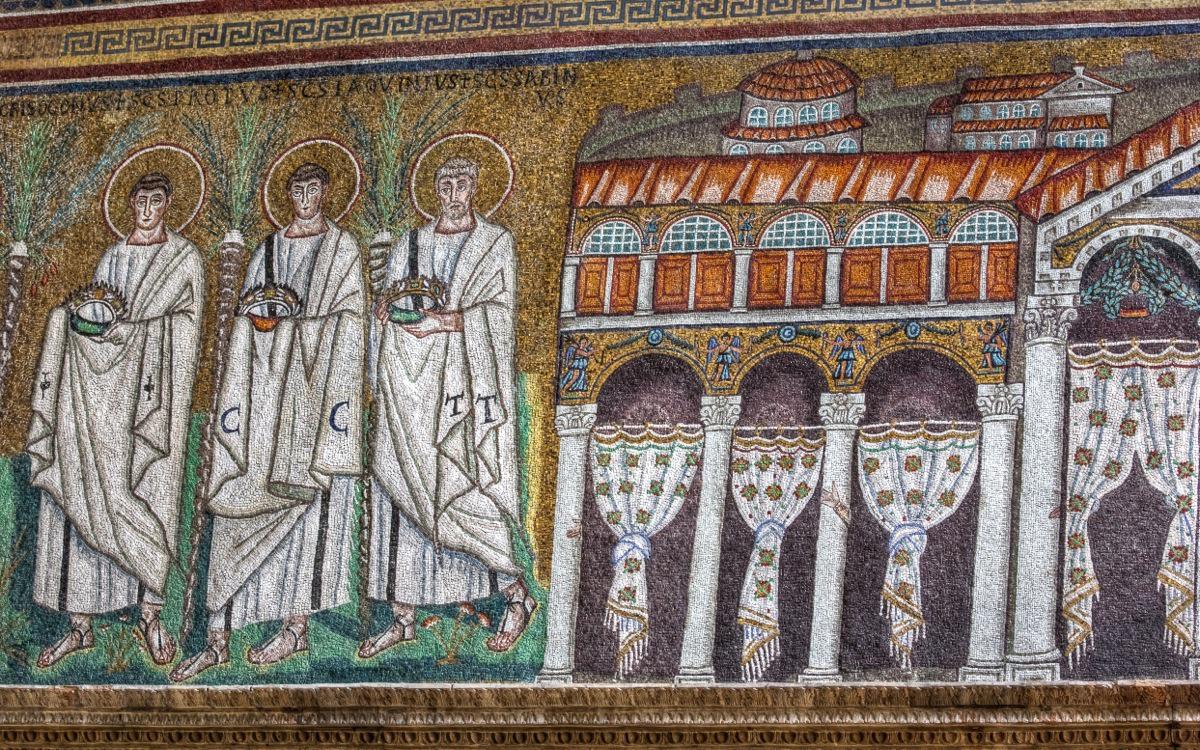 But let’s now board the train from Faenza to Florence and discover this charming itinerary.

The city has been famous since the Renaissance for its extraordinary tin-glazed pottery. During the 17th and 18th centuries, France and, later, Germany, inspired by Faenza’s outstanding products, started manufacturing tin-glazed tableware and other objects. They called them Faience, the French version for Faenza. Oddly enough, the name for Faenza’s ceramics is not Faience but Majolica. Additionally, the process of creating this unique tin-glazed pottery is slightly different.

Unless art is not your piece of cake, it’s worth visiting Faenza’s International Museum of Ceramics (MIC), one of the most important in the world. The collection includes Italian ceramics from the Middle Age to the 19th century, works from the Middle East, Far East, and Pre-columbian pottery. A section of the Museum is also focused on Modern and Contemporary ceramics.

As you stroll in Piazza del Popolo, you’ll see two palaces standing out: Palazzo del Podestà and Palazzo Manfredi. Palazzo del Podestà is the typical, gorgeous medieval building, following the architectural structure found, with multiple variations, in other Italian cities and towns, like Bergamo. Albeit dating back to the 13th century, Palazzo Manfredi underwent a significant transformation in the 18th century. The portico’s slender columns and the facade lend a sense of lightness hardly present in medieval constructions. Don’t miss the arcade (Voltone della Molinella) connecting Piazza del Popolo to the neoclassical Teatro Masini. Its beautiful decorated vaulted ceiling dates back from the mid-1500s.

From Faenza, after you board Dante’s Train, the first main halt is Brisighella.

Surrounded by gentle hills, most of which covered with olive groves or vineyards, Brisighella is considered one of Italy’s most beautiful towns. It certainly is one of the many charming villages in Emilia Romagna, a region with a lot to offer. I must admit that I’m sometimes wary of these definitions, but Brisighella is indeed enchanting. So much so that I visited it three times!

Despite its small dimensions, there a plenty of things to do in Brisighella. Starting from the colorful houses of the tiny historical center, dotted with cute cafes and restaurants, delightful spots to have a drink or a bite while taking in the beautiful context. As you stroll along the main road, you’ll notice that the houses have semicircular arcades. You’ll understand why they were created once you explore the fantastic Via degli Asini, the Donkey’s Alley. That unique elevated road, passing in front of the houses and illuminated by the arches, was used to transport gypsum with donkeys. Hence, its name.

The most significant landmarks are perched on the three rocky hills giving Brisighella its unique structure: the clock tower, the castle (Rocca Manfrediana), and the Madonna del Monticino’s sanctuary. So get ready for a short, sometimes steep climb, and wear comfortable shoes. It’s a little effort, but the reward is fantastic. Besides the beautiful monuments, you’ll get breathtaking views of the rolling hills and discover the idyllic landscape.

Suppose you decide to spend a couple of days in Brisighella, which I strongly recommend. In that case, I suggest you combine your visit with a lovely day hike to Rifugio Carnè. You’ll walk in the beautiful Parco Regionale della Vena del Gesso, following a small portion of the Dante’s Way, a long-distance circular hike from Ravenna to Florence and back.

Back on Dante’s train, southward towards Florence, you’ll reach Marradi. This tiny village is at the border between Emilia Romagna and Tuscany. Actually, it marks the first step on Tuscan land.

Isolation didn’t shield Marradi from tragic events. First, a strong earthquake in 1919, followed by bombings at the end of World War II. Today, Marradi appears like a peaceful hamlet nestled in the Apennines mountain range, where life flows slowly.

The village may seem unassuming, although it offers a few lovely sights. I particularly enjoyed the houses’ reflection in the Lamone river and the alleys inviting me to get lost. Marradi is famous for its chestnuts and often nicknamed the “Town of Chestnuts.” They are ubiquitous in shops, selling a wide range of typical chestnut-based products. And in the local food specialties, which you can taste at one of the trattorias.

To immerse yourself in nature, you can hike one of the many trails surrounding Marradi, enjoying the views of the Mugello and savoring the peace.

The city, which was the cradle of the Renaissance, doesn’t need any introduction. Florence was Dante Alighieri’s birthplace. And after his exile, Dante never stopped hoping to come back.

Although many tourists, even Italian, are not aware of it, a few of Florence’s landmarks are deeply related to Dante Alighieri. The octagonal S. Giovanni baptistry, facing Santa Maria del Fiore cathedral, is where Dante was baptized in 1266. On the side of the Santa Croce church, famous for Giotto’s magnificent frescoes and the tombs of Michelangelo, Galileo Galilei, Gioacchino Rossini, Niccolò Macchiavelli, a statue of Dante Alighieri pays homage to the Poet.

The Abbey of San Miniato al Monte offers one of the best views of Florence. You can reach it by bus, but I suggest you walk uphill along the Via Crucis. You’ll immerse yourself in a spiritual walk which, at his time, Dante equaled to the ascent to the Mount of Purgatory.

The scenic train ride on Dante’s Train ends in Florence. How much you want to explore along the route is up to you. For sure, if you’d like to discover a more authentic Italy, you’ll enjoy that slow journey from Emilia Romagna to Tuscany. And if you haven’t already visited the Tuscan capital, find out how to get the most of Florence in one day.

Faenza is within easy reach from Rimini (30-40 minutes), Ravenna (30-40 minutes), and Bologna (25-45 minutes). Alternatively, you can also plan a trip from Rome, traveling from Florence to Faenza (it takes 1 hour 36 min to reach Florence from Rome by high-speed train).

Note: I traveled on Dante’s Train and visited several towns in collaboration with Emilia Romagna Turismo and iambassador. As always, all views and opinions are mines. 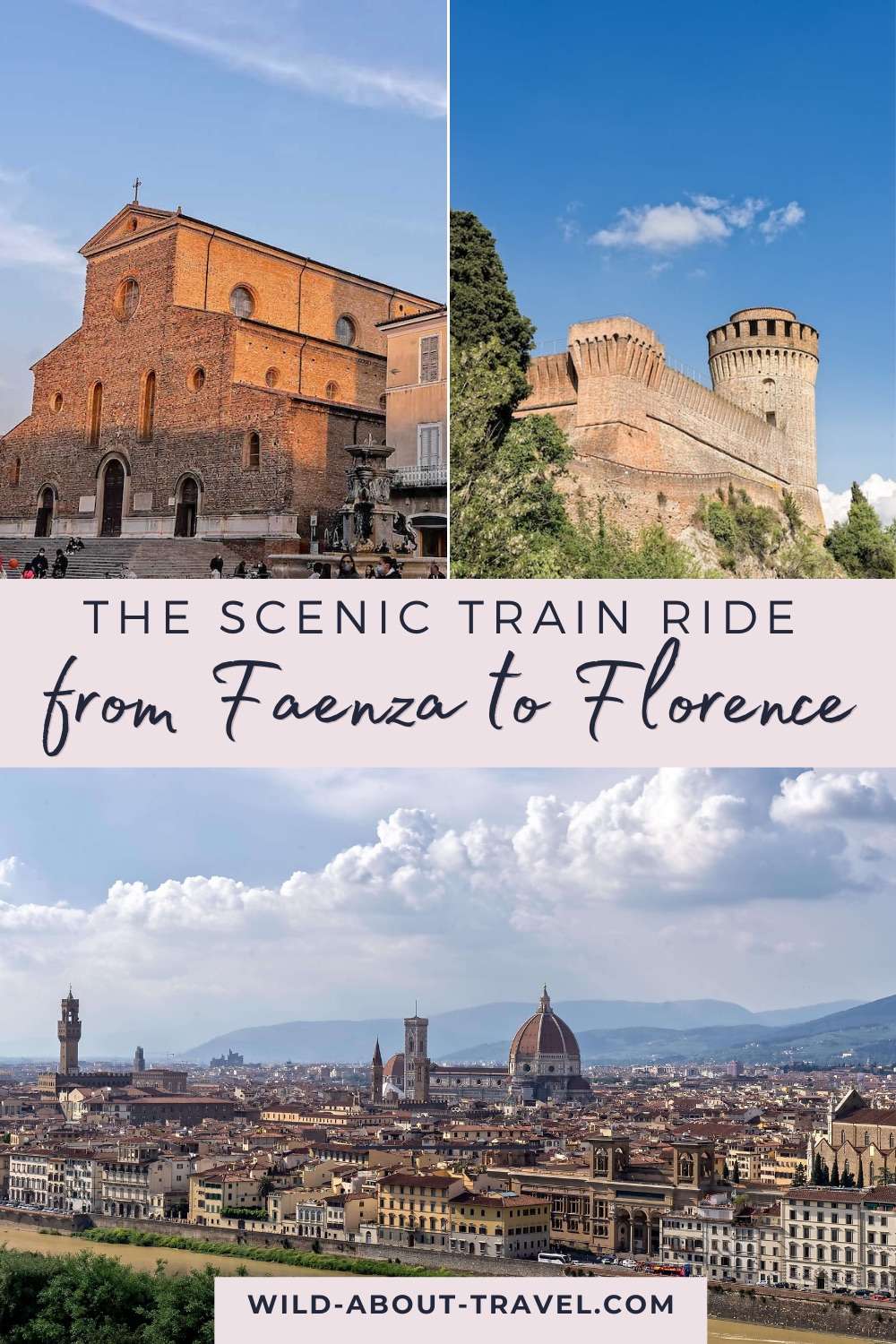