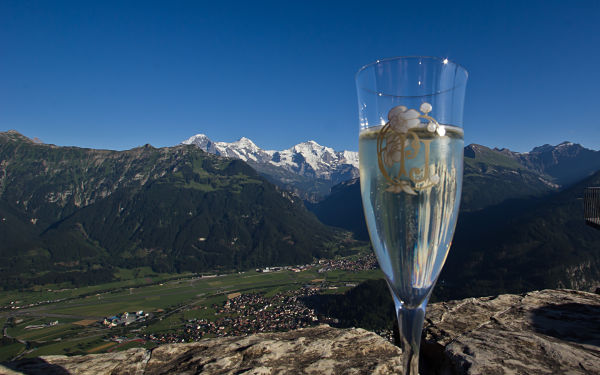 All of a sudden, I  realised that although I grew up and lived in Switzerland for 11 years, I had never experienced Swiss National Day. Early August is the time of Summer school vacations and I was always away in Italy with my parents, missing the celebrations of the establishment of Switzerland.

On the 1st of August 1291 the Cantons of Uri, Schwyz and Unterwald swore an oath of mutual support in case of an external aggression endangering their freedom, thus setting the foundation of what would become the Swiss Confederacy. It took however 600 years before the government in 1891 declared the 1st of August as the official Swiss National Day.

The National Day is celebrated in every municipality across Switzerland with bonfires, fireworks and often parades and other activities and entertainment.

In Interlaken, the houses and hotels were all decorated with flags of Switzerland – red with a bold white cross in the middle – and the ones of the 26 cantons. Everything in this lovely town, nestled between the Lake of Thun and the Lake of Brienz, was joyful and colourful.

How exciting being part of a group of people paragliding with the swiss flags to celebrate Swiss National Day!

In the morning, I had the privilege to do a very special tandem paragliding flight together with a group of people, each one with a flag fluttering during the flight.

It was a perfect day, with clear blue skies and a little breeze up the crest from where we would run and soar. While the excellent team of Skywings prepared the colourful wings on the grass, I had a chat with a few of the people who would take with me this very special flight, taking place only once a year during Swiss National Day. There were people from all over the world, all keen to fly over this beautiful region. A short run and we were up in the air, overlooking the majestic Jungfrau and the glaciers, the valley and the lakes, our flags waving to the people gathered in town and looking at us floating in the air. It was wonderful and so exciting!

The celebrations were only at the beginning and in the afternoon, under a burning sun and an uncommon heat, it was time for the picturesque parade along Interlaken main road. One after the other, small groups walked across the town with their traditional costumes, evoking famous characters of the Swiss history and traditions.

Wilhelm Tell and his family, the farmers and their cows, people wearing their traditional costumes, the soldiers of the past and so on. More than ever, the 1st of August was a proof of how much the Swiss people are  proud of their traditions, no matter that it is one of the richest and most developed countries in the world.

No celebrations can end without fireworks, and from the restaurant at the top of Harder Kulm, the mountain overlooking Interlaken with a fantastic view on the Jungfrau and the lakes, we enjoyed the fireworks taking place in all the towns in the valley below.

Celebrating Swiss National Day was a lovely and special experience, but there are many other local traditional events throughout Switzerland during the year which are worth attending at to get the feeling of the country’s history and its deep-rooted traditions.

Note: Warm thanks to the Jungfrau Mountain Railways for the invitation to discover this amazing region, and to Skywings for an unforgettable paragliding experience.  As always, all views are mine and mine only.

More reading: Hiking through the Meadows to Lake Arnensee