Known for balsamic vinegar, Maserati headquarter and world-famous opera singer Luciano Pavarotti, Modena is one of the most charming little cities of the Emilia-Romagna region, home to a stunning UNESCO World Heritage Site comprising the Cathedral, Piazza Grande and the Ghirlandina Bell Tower. 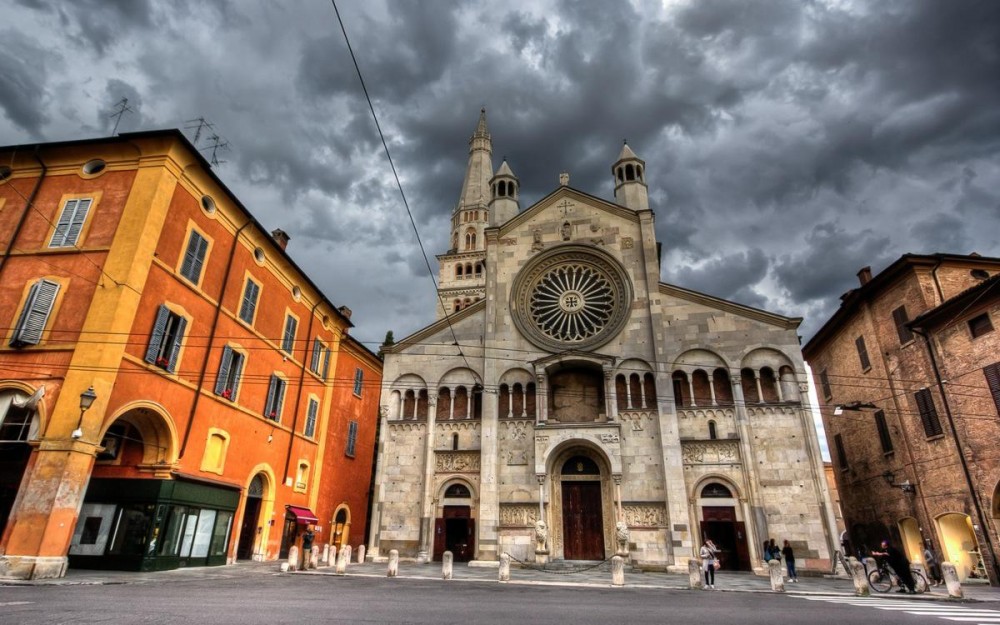 They are the heart of the city, a place of pure harmony where beauty is set in stone, reminding of the ancient splendours of the Middle Age and the Renaissance. 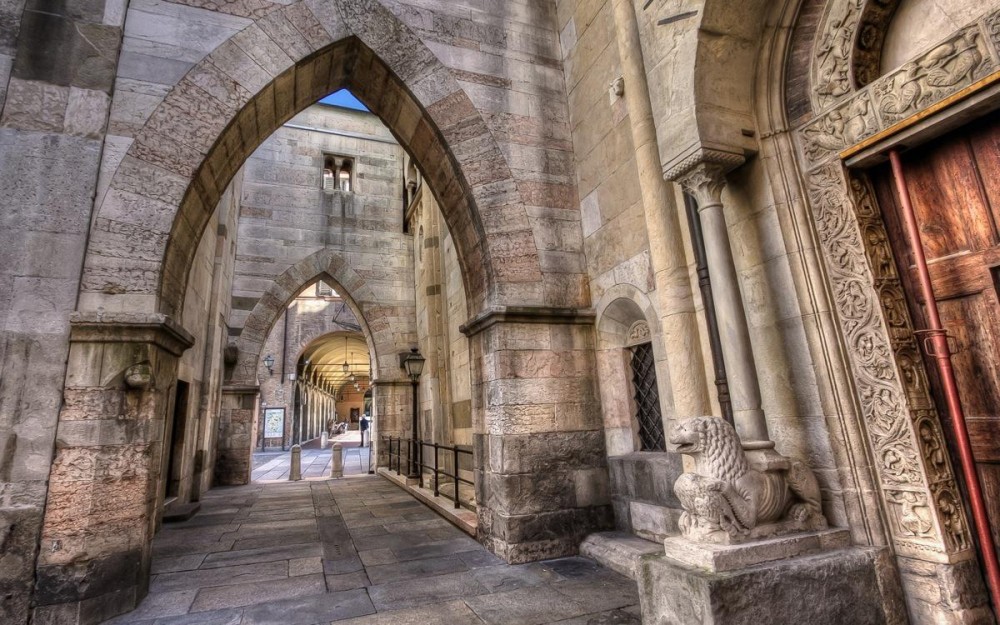 Looking at Modena Piazza Grande, I came to think at how many breathtaking monumental squares there are in Italy. Piazza del Duomo in Milan, Piazza del Nettuno in Bologna, Piazza San Carlo in Turin, Piazza dei Miracoli in Pisa, only to mention a few.

No place like a well-preserved square can give an idea of how magnificent these cities must have been in the past. 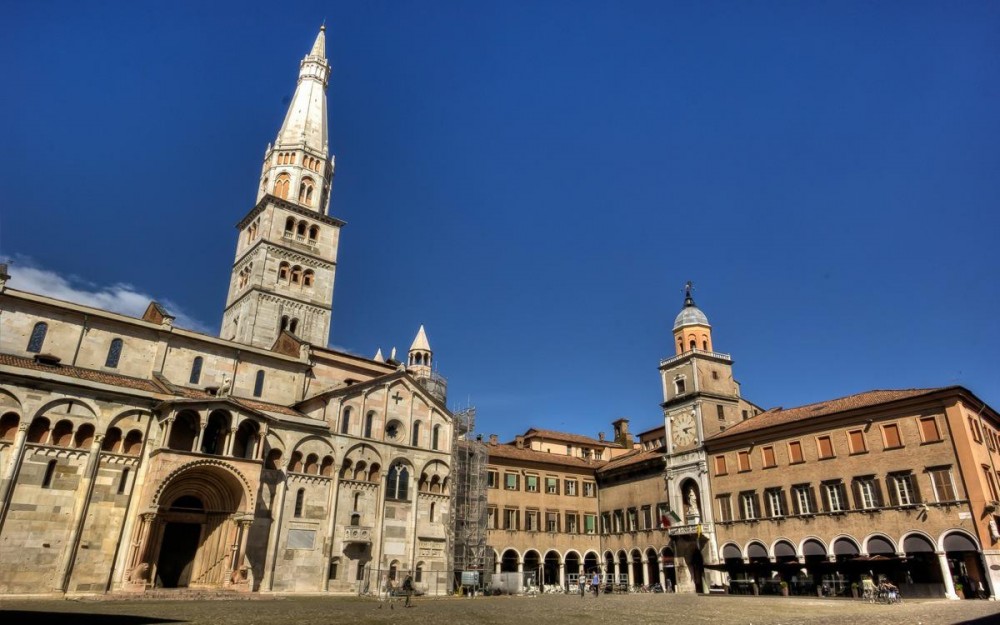 Piazza Grande asks for contemplation, as it takes some time for the eyes to catch up with so much beauty and perfection, all in one place.

The Duomo of Modena (as the Cathedral is named in Italian), with its gleaming white marble façade adorned by some of the highest examples of medieval sculpture, is one of the most important Romanesque landmarks in Europe. 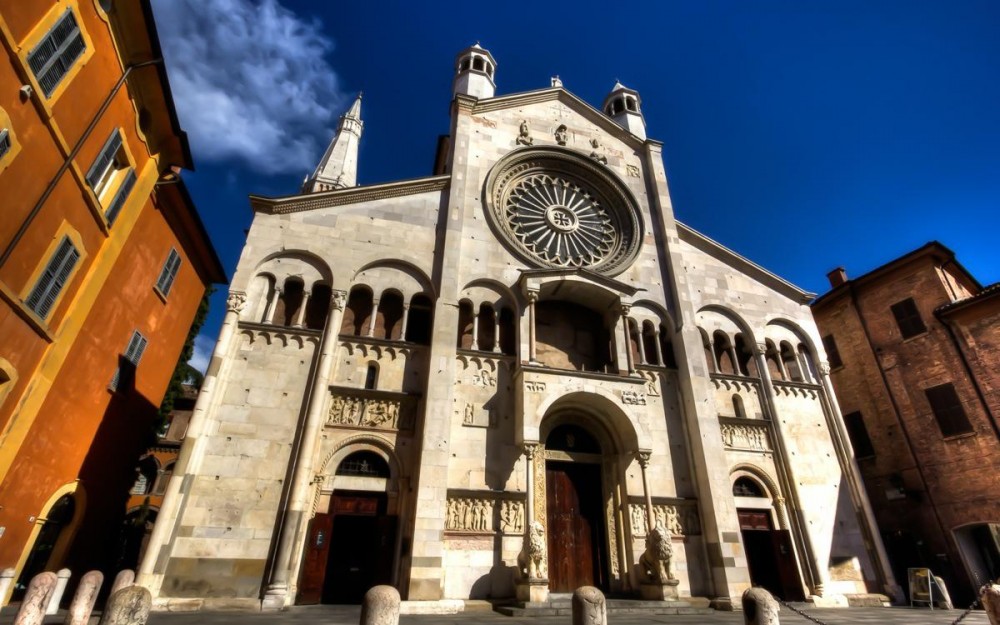 Dating back to 1099, its magnificence is due to the creative genius of two of the main artists of the late 11th Century: the architect Lanfranco and the sculptor Wiligelmo, whose masterpiece became a model for the Romanesque architecture and sculpture in the Po Valley.

The  cathedral construction required many years and after the death of Wiligelmo, part of the work and of the sculptures was completed by the Maestri Campionesi, a group of talented carvers and builders from Campione, the town on the shore of the Lugano lake from which their name derives. 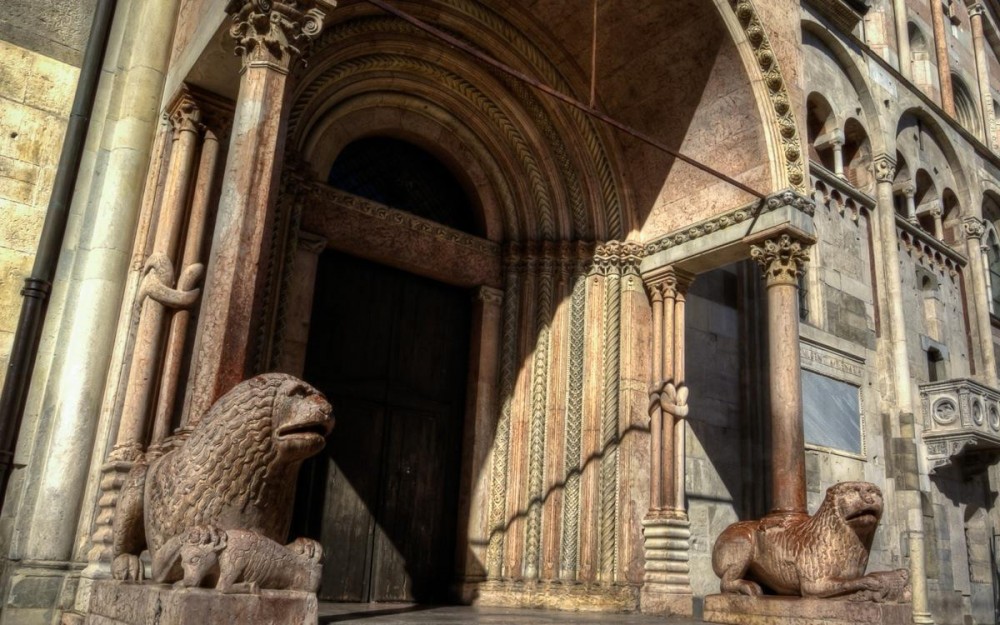 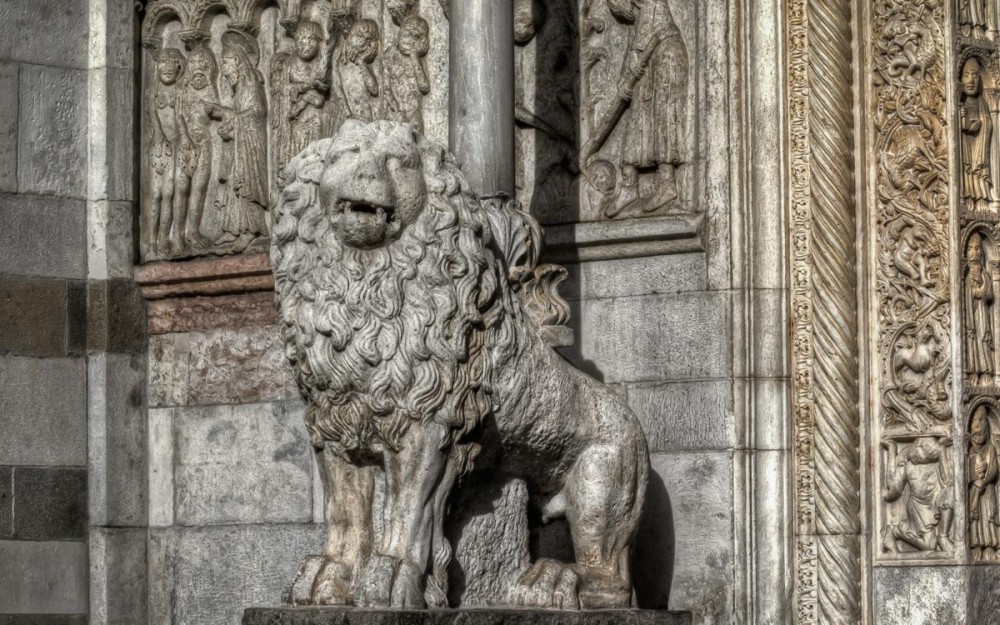 Inside, the Cathedral of Modena strikes for its powerful structure and the crypt, with its 60 slender columns and the exquisitely carved capitals.

I could feel the spirituality emanating from the cathedral and at the same time I couldn’t help thinking that these were the years of the First Crusade, the beginning of a 200 years sequel of military campaigns promoted by the Latin Roman Catholic Church for control of the Holy Land, with its strong contradictions between extreme violence and chivalry. 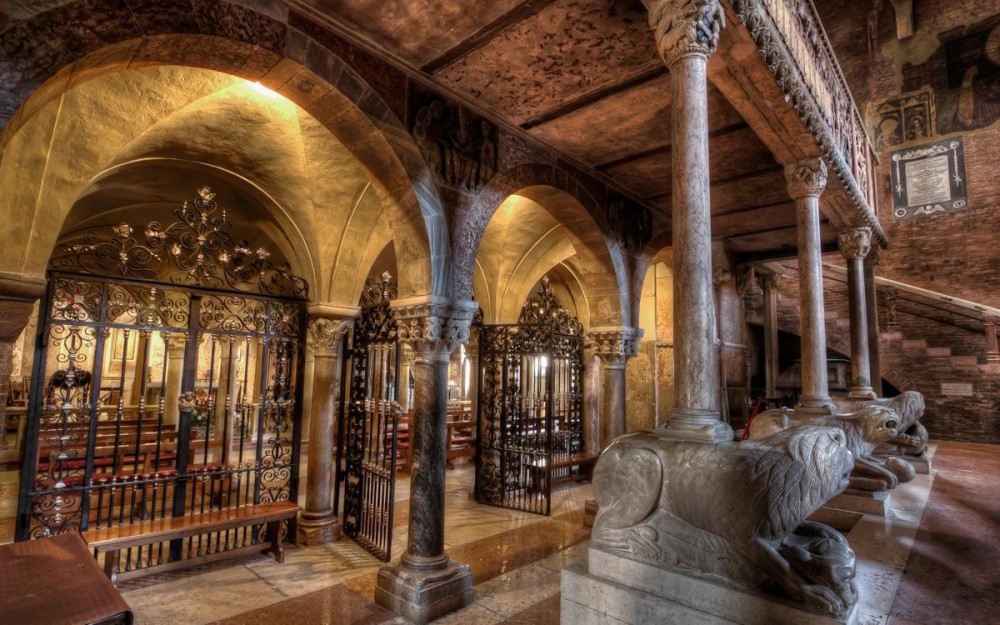 Back to Piazza Grande the blue sky had become moody, with ominous clouds magnifying the colours and the shades, shrouding  the square with a golden, warm light.

Time to admire the medieval bell tower, the symbol of Modena named Ghirlandina (‘little garland’) for the balustrade adorning the steeple as if it were a garland. 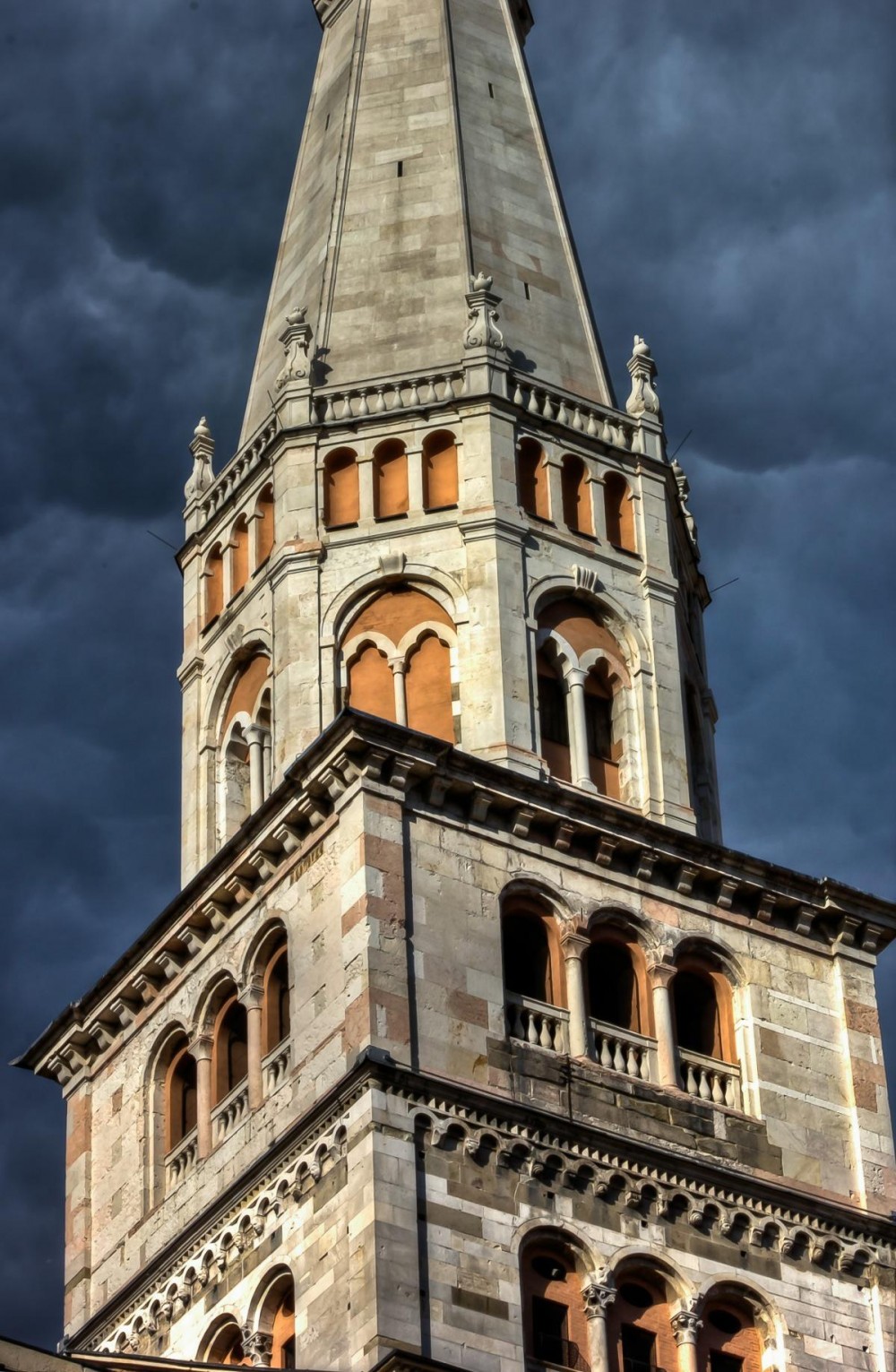 Visible from almost everywhere, the bell tower had historically an important civil function, with the bells tolling to announce the opening of the gates or to gather the citizens in case of danger.

The third landmark part of the UNESCO World Heritage Site is Modena Town Hall, dating back to the 17th and 18th centuries when the existing buildings were put together to form a new architectural ensemble where the clock tower is the most beautiful highlight. 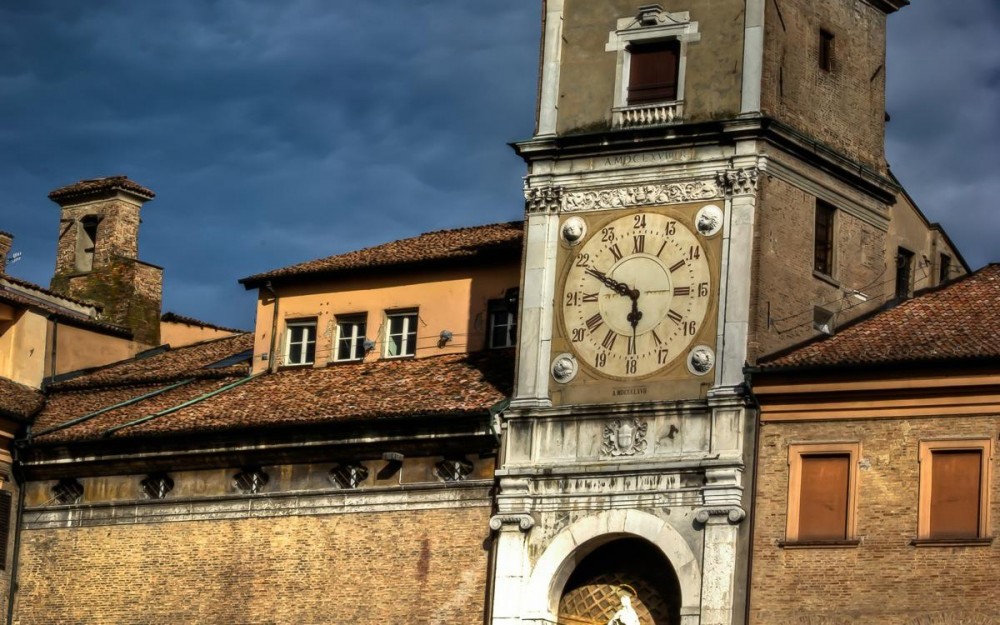 All together, Piazza Grande, the cathedral and the Ghirlandina make for one of the most scenic squares in the world, a place hard to forget, a must visit in Italy.

View Modena in a larger map

This post was brought to you as a result of the #Blogville campaign, created and managed by iambassador  in partnership with Emilia Romagna Tourism.

Himeji Castle and the Legend of Princess Sen
Next Post: From Yangon to Dala Township: A Photo Tour