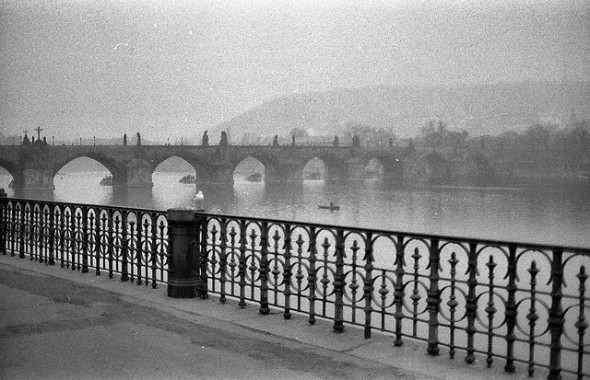 This is the second episode of my journey to Prague, back in 1980.

♦ Our stay: we visited all the main historic and touristic attractions in Prague, always escorted by our ubiquitous guide: the castle, Charles bridge, the old town square with the famous astronomical clock, the crown jewels, the National Museum and more. All this was very nice, and interesting and instructive but… I wanted to see the real life, talk to the people, understand how life was in a country that was so different and distant from my environment.

♦ First impressions: my memories could be a little faded, however there are a few things which I can remember as if I had experienced them yesterday. What is it that impressed me?

– The look of the people walking in the streets. Sad, always low, sometimes scared

– The tension, floating around. There were armed soldiers and policemen everywhere, controlling every move, menacing and ready to be violent at the slightest suspect

–  The black market for illegal money exchange. We were discreetly caught and driven in a dark little courtyard by people desperately looking for foreign currency. Wonder why? Because most goods were accessible only if paid in US dollars, Deutsch Mark and Swiss Francs.

– The food shops and the queues: there was only little basic food as sugar, salt, coffee, bread and often people had to patiently stay in line to get their daily portion. I remember a fruit and vegetable shop, full of cases all containing apples. Small and ugly apples. I felt so lucky in that moment, and a little guilty. We had so much more at home!

–  The power of money: one night, we wanted to try the Russian restaurant. We had been told it was one of the best places in Prague, very expensive and usually serving high officers, Party leaders and a few rich people. We stepped in the restaurant and were immediately blocked by a waiter scanning us from head to feet and declaring that there were no tables free.

All right, we were 17 and wore jeans, sweater and gym shoes but we didn’t buy the excuse. There were plenty of free tables in the dining room and it was already almost late. Suddenly, another waiter approached. He asked us where we came from and once he heard the word ‘Switzerland’ (and probably the sound of Swiss Francs…) he immediately offered his apologies and welcomed us for dinner.

– A different scale of values: reading the menu at the Russian restaurant was quite an experience. Russian caviar was very cheap, cheaper than fruits or an apple cake. So was the case with other food which we were used to consider as a luxury.

I learned that the values we were used to give at home to some goods could be completely different. As far as I could understand at that time, in Prague caviar was very cheap because provided by Russia while imported fruits were as expensive as gold. A good lesson for a young girl.