Can you imagine an ironworks plant being a UNESCO World Heritage Site?

As an Italian used to the archaeological wonders in Rome, or magnificent Romanesque, Renaissance, Baroque buildings, the idea of the Völklinger Hütte – after all, an industrial facility – sounded a little weird.

Don’t get me wrong: I’m fascinated by old, abandoned and crumbling places. I loved the ghost town of Craco, in the Basilicata region, and I have hundreds pictures of decaying houses, wrecked windows and doors. Only it never occurred to me to relate them to a UNESCO WHS. The opportunity to visit the Völklinger Ironworks, in southern Germany’s Saarland region, was thus all the most interesting.

Pioneering technology, a geographical area disputed by Germany and France, and the spectre of the Nazis and World War II.

Established in 1873 by the German engineer Julius Buch the works were acquired in 1881 by Karl Röchling and later developed by his son Hermann Röchling. Under Hermann directorship, the Völklinger Ironworks introduced important technological improvements, becoming a pioneering production site and a model for pig-iron production.

The undisputed scientific and industrial genius of Hermann Röchling is however darkened by his belonging to the Nazi Party, the good relationship with Hitler and his role during World War II, including his strong antisemitic views and the large use of forced labour and war prisoners in the ironworks, under unbelievably harsh working conditions.

In November 1946 Röchling was arrested and handed over to France, where he was put on trial for crimes against humanity. The Völklinger Hütte was confiscated by France and all Röchling family private fortune was seized.

The receivership ended in 1956, when the Völklinger Ironworks were returned to the family. However, the good times were irreparably over. The plant underwent only minor investments and maintenance until 1986, when the pig-iron production ceased.

The geographical setting of the Völklinger Hütte certainly also played an important role, for this area on the border between Germany and France has long been disputed between the two countries. It went ‘back and forth’ between the two nations several times and was an important battleground during World War I and II, when both times France and Germany were facing each other as enemies.

Völklinger Hütte: First industrial monument to be inscribed as a UNESCO WHS

The Völklinger Ironworks were inscribed as a UNESCO World Heritage Site in 1994, the first industrial site to be included being the “sole integrated ironworks from the 19th and 20th centuries that remained intact”.

I’ll tell the truth… I’m not sure how I feel about that.

I understand the importance that the iron and steel technology had in the economic development and I believe that it’s paramount to keep track of the past, no matter how bad or painful it was. And I also feel a little ashamed because when I was there I felt only fascinated by the atmosphere of this incredible abandoned production site, the rusting iron structure, the old electrical panels looking like contemporary art works, the gas powered engines, the overall fascination of the crumbling works.

Perhaps it’s me who didn’t pay enough attention during the visit, too focused on my camera and the overall view and impression, but when I was there I discerned a strong emphasis on the technical excellence of the Völklinger Ironworks and far less on the human side.

Thankfully, I haven’t completely forgotten German thus I was able to do a little research afterwards and read a little about the site, the owners, as well as their role and the one of the plant during World War II.

That’s when I started to feel a little uncomfortable.

The Holocaust is the historical event that most impressed – and saddened – me when I was a teenager (that’s one of the reasons I cherish Berlin and the many monuments and museums, because we shall never forget one of the darkest chapters of the 20th Century history) and thinking back to my visit to the Völklinger Ironworks I still don’t know if I am the one to blame.

Perhaps I was distracted, and only partially caught the drama hiding behind the haunted beauty of this industrial site. Perhaps there should have been a stronger focus on the historical and human perspective.

I don’t have the answer. What I know, however, is that the ironworks are something anyone traveling in Southern Germany, Northern Switzerland, Alsace or Luxembourg should add on the itinerary. Only don’t make the same mistake I did, and while you look at this riveting site, bear in mind the bigger, historical and human picture.

Note: The trip to Saarland and the Völklinger Ironworks was organised by the German National Tourist Board. I am glad I was given the opportunity to discover an area and a very unusual UNESCO Site I may not have visited otherwise and as always, the views expressed above are only mine.

Turin by Night, Black and White Postcards
Next Post: Mantua and the Magnificent Palazzo del Te: a Must-See for Art Enthusiasts 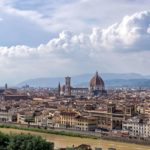