2 Days in Munich: How to Experience the Best of Bavaria’s Capital 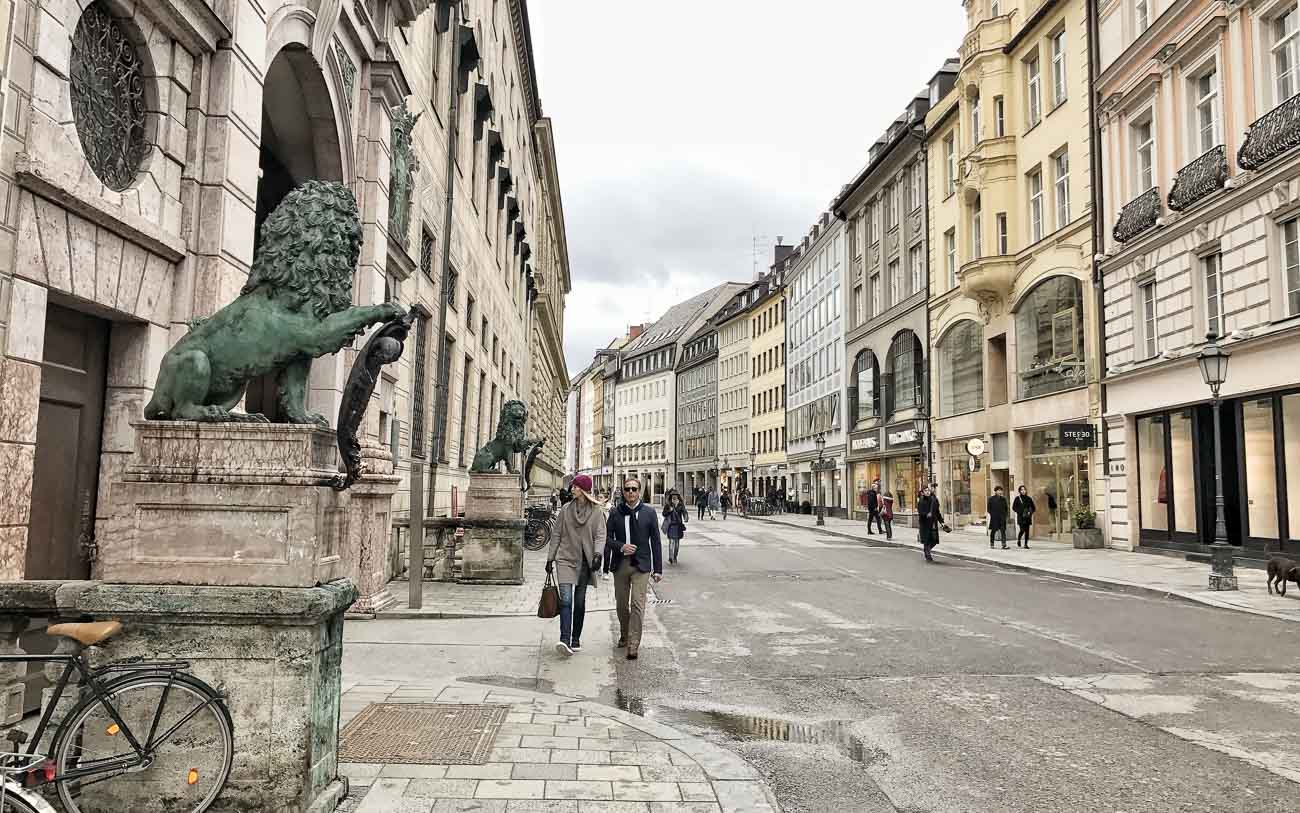 Easy to reach from all the main European cities, Munich is perfect for a weekend getaway in Europe. But how to spend 2 days in Munich and experience the best in the city? Find out about what to do in Munich for 2 days, and build your perfect Munich itinerary.

Of course, the longer you stay the more you can discover. However, chances are that you’ll spend between 1 and 3 days in Munich, either during a weekend or as a leg of a more extended journey across Germany.

Coming from Berlin, where I’ve been several times, at a first glance Munich looked very different, almost opposite.  Where Berlin is trendy, vibrant, colored by the ubiquitous street art and graffiti, Munich is traditional, quieter, neat, and overall more classy.

The heavy bombings of Munich during World War II destroyed about 90% of the historical center, which was mostly rebuilt as it was before the destruction. Indeed, you can feel the impact of the city’s flourishing economy in the facades of the well-kept buildings and the affluence exuding from every detail.

Jump to the relevant section [Show]

Discover the best of Munich in 2 days

If you’re planning a weekend break in Munich, or a vacation in Bavaria, you’ll want to make the best of your time. Although a short time, 2 days in Munich are enough to visit the main attractions and explore the city.

However, since a couple of days are ending in a heartbeat, finding the best neighborhood when booking your accommodation in Munich is important. That’s why I wrote a dedicated post on the Best Hotels in Munich by district.

Also, if you have time to spend 3 days in Munich, there are many easy and beautiful day trips from Munich to discover more of charming Bavaria.

Munich has a lot to offer. Read about the city’s main attractions and start building up your Munich itinerary.

Take an introduction tour of Munich

City guided tours have become more and more popular and for a reason. When you don’t have much time, they’re an excellent option to get a first glimpse at some of the main attractions. It gives you also an idea of which ones you want to revisit at your own pace.

Here are a few Munich guided tours that are worth looking into:

Marienplatz, the heart of the city

Like the Duomo and the Cathedral square in Milan, and other Europan cities which kept their medieval city planning, Marienplatz is the heart of the city and its most famous spot. Its name derives from the Mariensäule, the column built in 1638 and dedicated to the Virgin Mary to celebrate the end of the occupation from Sweden.

Dominated by the New City Hall (Neues Rathaus), the Glockenspiel (the carillon re-enacting stories of royal weddings, tournaments, and dances from the 16th Century), and the Old City Hall (Altes Rathaus), Marienplatz is always busy and a good place for people watching.

Once the royal palace of the Bavarian monarchs, the Munich Residenz is a vast complex whose erection and development took over four Centuries. As a result, the Residenz assembles several styles: Renaissance, Baroque, Rococo and Neo-Classical, making it a rather interesting example of how art and architecture developed over time. 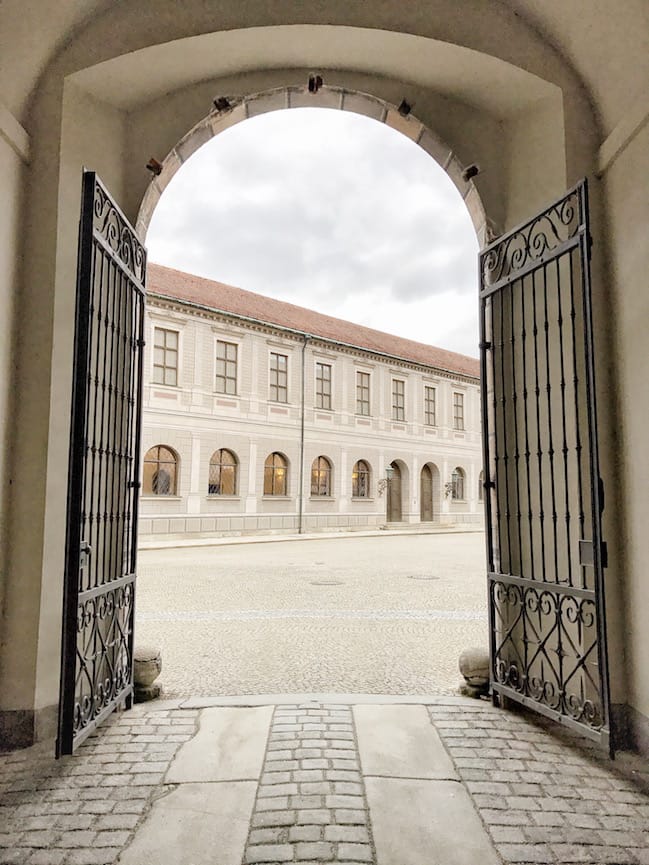 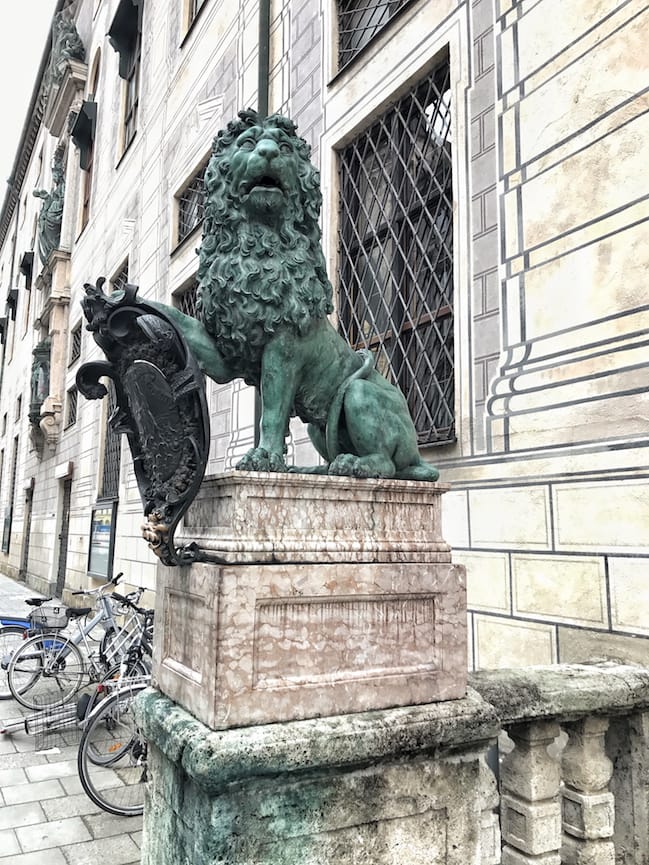 The palace is huge, and you can easily spend half a day visiting it or even a full day. I was more interested in its architecture than in the Museum and inner rooms (coming from Italy, I’ve seen more palaces than I can even remember about). But if you have enough time, the Museum, the Treasury and the Cuvilliés Theatre are certainly worth a visit.

Tip: if you like classical music and happen to visit Munich on a Thursday or a Saturday, treat yourself to a concert in the Munich Residenz Hofkapelle, where Mozart also played.

Take a stroll at the Viktualienmarkt

Although I’m Italian and live in Milan, I’m not a fashion victim and I don’t particularly like shopping. However, I love food markets. Whether it’s the Boquerìa in Barcelona, Borough Market in London, or the farmers’ markets in Myanmar, I never miss visiting at least one wherever I travel.

I’m drawn to the colors and I marvel when I look at foodstuffs I have never seen before and have no clue how to prepare it. Most of all, I like food markets because that’s where I feel I’m getting in touch with the local culture.

Once a farmer’s market, Viktualienmarkt has become a place for gourmets. There, you can buy any kind of delicatessen, or have a bite in one of the small restaurants. The market is one of Munich’s main tourist attractions, but you’ll also spot locals wearing the traditional Bavarian outfits, or stumble upon a few people playing the typical music of the area.

Pop in one of the art Museums in Munich

I have friends who wince when they hear the word “Museum” but in Munich, you can choose between a wide array and there’s something for everyone. Which are the best museums in Munich? It’s always hard to tell since it depends on multiple personal factors. However, there’s one art museum in Munich you can’t miss. Actually, it’s a collection of galleries going under the name of “Pinakothek”. If you love art, you should spare some time to visit at least one of the three main art galleries (Alte Pinakothek, Neue Pinakothek, Pinakothek der Moderne).

If you’re only spending 2 days in Munich, you’ll likely have time for just one Museum. I eventually decided to visit the Museum Brandhorst to feed my interest in contemporary art. It was an excellent choice, as I utterly enjoyed the architecture and the collection of more than 200 works by the American artist Cy Twombly, wonderfully displayed in wide and airy rooms. Museums don’t have to be boring, though. Therefore, if you’re passionate about cars, a must-see in Munich is the futuristic BMW Museum.

Chill out at the Englisher Garten

Nothing makes life good in a city like public parks. It’s good at some point to be far from the traffic, the urban noise, and the crowded streets. The Englischer Garten is a wonderful spot to chill out, walk amid nature, have a picnic, or a bike ride.

The park was created in the late 1700s and derives its name from the informal English garden style, popular at that time. It’s a huge green oasis and I was surprised to find out that not only it is one of the largest urban parks in Europe but it is also larger than Central Park in NYC.

Discover the opulence of the Bavarian monarchy at the Nymphenburg Palace

Once the Summer residence of the Bavarian monarchs, the Nymphenburg Palace is one of the most visited spots in Munich and I suspect this is partly related to King Ludwig II of Bavaria, who was born there in 1845.

Like with the Munich Residenz, you can decide whether you want to focus on the external architecture, admiring the perfect proportions of the Palace and strolling in the manicured gardens, or also visit the 20 lavishly decorated rooms.

If you like classical music, you may want to attend an evening concert at the Nymphenburg Palace, where Mozart performed as a child.

Munich beer: have a dip into Munich brewery culture

Odd as it may soon, they didn’t. Actually, beer is one of the oldest mild alcoholic beverages, already produced… 13,000 years ago! Nevertheless, Germany and beer are definitely a couple. And it’s hard to think of Munich without evoking this delicious drink.

Obviously, you can have beer everywhere in Munich, and weather permitting you should definitely visit and chill out at a Biergarten. But you can also have a fun night out taking an evening tour to discover Bavarian beer and food culture and get to know new people.

Munich airport is one of the busiest airports in Europe, serving a wide number of international destinations (including low-cost European carriers).

Another option is to buy the City Tour Card, for public transport and a range of discounts to visit the main attractions.

Where to stay in Munich

Two days in Munich is not a long time. Therefore, I suggest you stay in the city center and near the subway to easily reach the main attractions.

Hotel MIO by AMANO is perfectly located in the heart of Munich. The common areas are stylish and the rooms are simple, modern, and comfortable.

Only a 5-minute walk to Marienplatz Square, Hotel Blauer Bock is set in a 400 years old building and features warm decor, with a Bavarian touch.

If you’re looking for a special stay, the Boutique Hotel Splendid-Dollmann is a great choice. The decor is classic and warm, and even the beautiful suites have affordable prices.

Tip: If you plan to visit Munich during Oktoberfest or the Christmas Markets season, I suggest you book largely in advance.

Fun things to do in Munich

If you’re keen to discover the city in a fun and alternative way, have a look at these unusual Munich tours.

And if you stay longer…

In case you’re spending more than 2 days in Munich, you can take advantage of the city’s geographic location, nearby many interesting attractions. There are plenty of day tours from Munich to choose from, and there’s something for any taste. Hereunder, I mention the 3 most popular. However, there are many more, so I suggest you read my article on the best day trips from Munich. 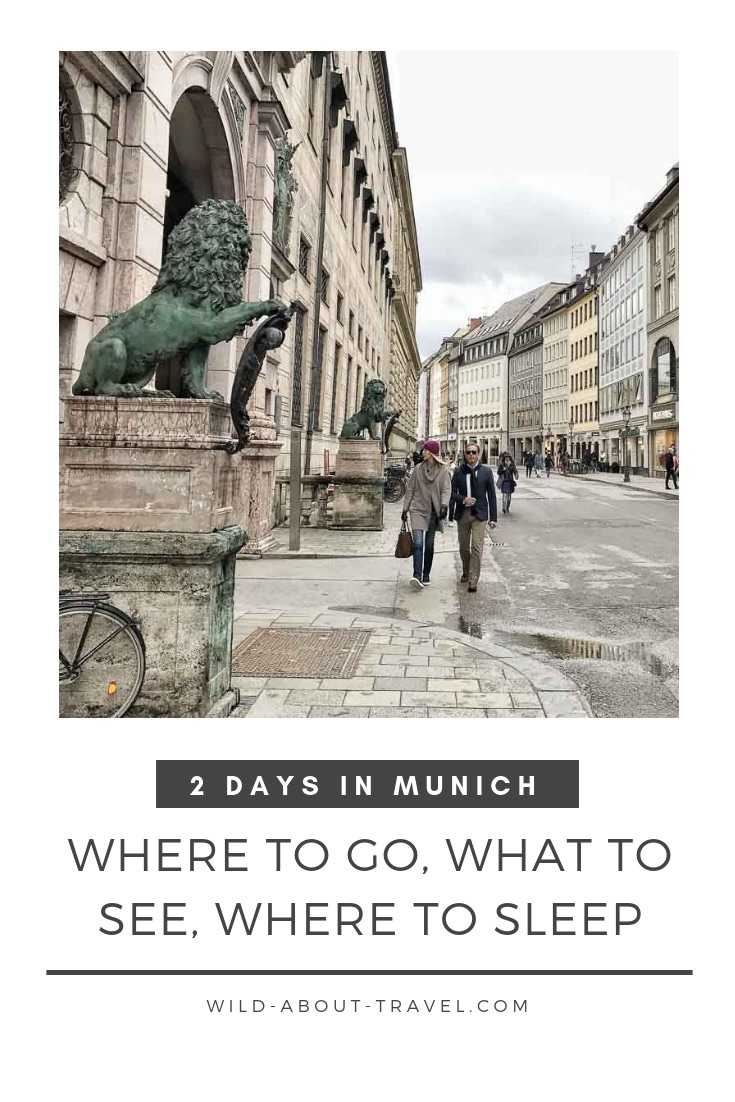 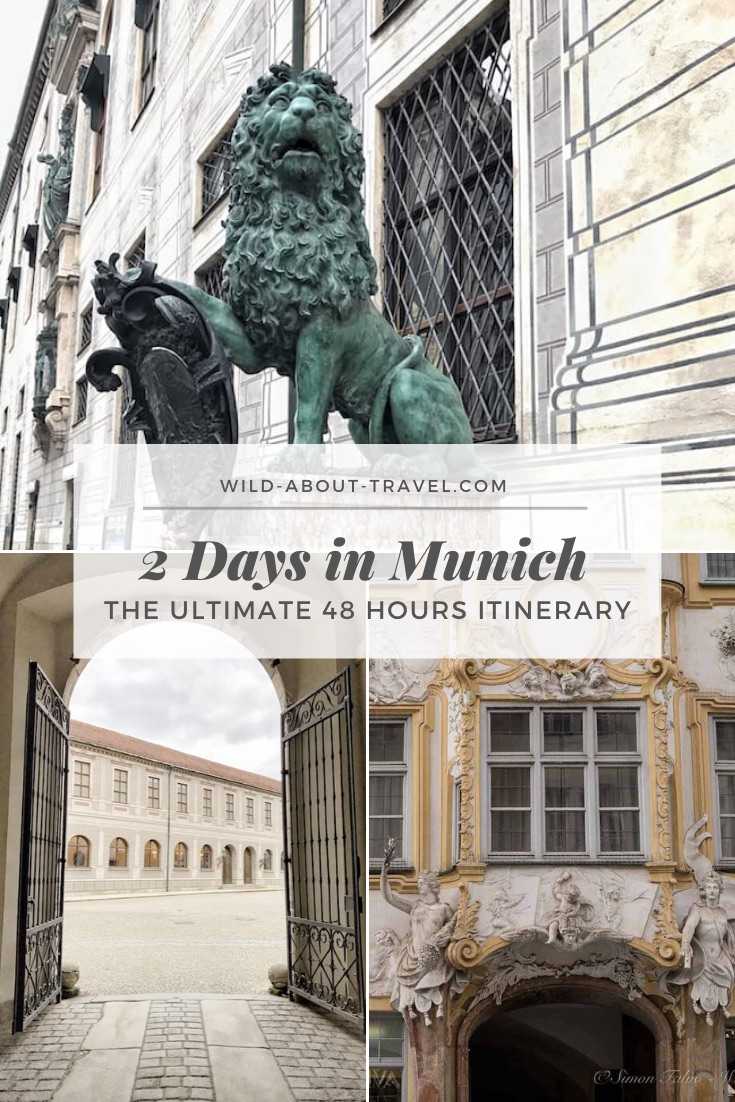